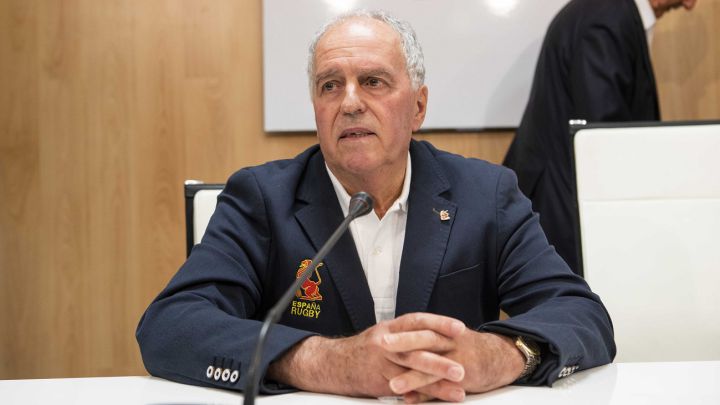 The scene was somber this Friday at the headquarters of the Higher Sports Council. Four years later, the main officials of Spanish rugby appeared again to give explanations about a new expulsion from the World Cup due to a case of ineligibility. At the table, Alfonso Feijoo, federative president; José María Epalza, head of the Eligibility Committee; and Carlos García-Trevijano, head of the Disciplinary Committee. Funeral faces. The air could be cut with a knife.

As soon as the appearance began, Feijoo announced his resignation, which will come when “the disciplinary processes initiated are well under way so that the new leaders cannot stop them.” “I am responsible, but we are not to blame for what has happened. I find it difficult to understand World Rugby’s decision based on rules that have not observed the exceptional circumstances of the case. We will appeal because the sanction seems disproportionate. It has been brought to our attention from the prosecution the possible falsity of a public document and the player has been removed. We have been deceived. We never thought that someone could falsify a document in rugby”, he detailed about the case of Gavin van den Berg, the South African pilier from Alcobendas who This Thursday he was declared in an irregular situation by the International Federation.

Epalza then proceeded to elaborate a detailed chronology of the events: “According to the regulations of the Division of Honor, it is required that in each match there are at least nine eligible players, who comply with World Rugby rule 8. All teams must provide the corresponding documentation before being selected. In this case, the club sends us the documentation, with a new passport issued in September 2021, and we ask for the old passport, which had been lost. He sends a certificate from the police station denouncing the loss of the passport in June 2021. On October 26 we began to cross documentation and on November 18 he sends us the photocopied old passport, where all the trips in the three years were listed. previous. There were no departures in 2021 or 2020. There was a departure to South Africa in 2019, on July 7, to care for his sick father and it was for 58 days, arriving in Spain on September 4. We understood that there were 62. It was within the limit of 60 days per year allowed. We consult World Rugby and they tell us that it is acceptable and that it is eligible. Having the approval, he is summoned. On 7th March we received a statement from World Rugby informing us of a Romanian complaint based on a photograph of the player at a wedding in South Africa on 15th June. He confirms to us that he was in it. We make inquiries and on March 24 we receive a letter from Alcobendas in which three members of the club admit to having falsified the passport, two of them as instigators and the third as material author. In the letter, the three people who admit to having falsified the passport say that neither the club nor the player were aware of that falsification. This consists of modifying the dates of entry and exit in Spain so that it seems that he was 58 days away when in fact he was more.

Garcia Trevijano for his part, he glossed the answers that the Disciplinary Committee was giving as the facts became known. On March 25, after receiving the letter from Alcobendas, “an extraordinary disciplinary procedure” was initiated. And this Thursday, when World Rugby’s decision was known, “the training condition was withdrawn” and “an ordinary procedure” was opened to determine the possible sanctions for Alcobendas, which could stay without playing the Copa del Rey final , scheduled for this Sunday against El Salvador, and even lose the category based on the claims of the rest of the Division of Honor teams. The Madrid team is also exposed to an economic fine. None of those present wanted to reveal the names of those involved in the falsification process due to data protection, but the player’s participation was ruled out. “It should be the courts that determine the scope of each one’s criminal responsibilities,” García Trevijano asserted.

Already in question time, Epalza announced that he will also resign once “the appeal is filed with World Rugby and the hearing is held, which will be within a month or so”. The manager ruled out the similarities with the case four years ago, when Frenchmen Mathieu Belie and Bastien Fuster breached World Rugby’s nationalization regulations: “The players were sanctioned by a regulation that World Rugby considered unfair. As for the passport verification, it did not fit in my head that nobody falsified a passport to have an F of formation, it is something so minor … “. And he defended himself by saying that the hundreds of files that are presented each year “are studied in detail.” “You can’t check the officiality of everything they send us,” she concluded.

Feijoo delved into the idea that the procedure was followed properly. “Our eligibility protocol has been congratulated by World Rugby and communicated to other federations. If we were the Football Federation we would have ten people with this, but our budget is limited.”the president puffed out his chest, although he acknowledged that more can be “demanded” because control has proven to be “imperfect.”

Feijoo: “For me there is no explanation that someone, due to an F for training, falsifies a public document. Since I know what Spanish rugby is, what I carry inside, if one day I said it, in the end I would shut up. guilt I’m leaving”. “Spanish rugby is not going to the World Cup, nor are the players who have earned it on the field or others who have worked hard. I’m obviously not happy, but there are elements that cannot be controlled,” closed what could be the most disastrous press conference in the history of Spanish rugby, which is actually a mere deja vu.

Spanish rugby, outraged after running out of the World Cup: “We have been deceived”

Spain out of the Rugby World Cup due to improper alignment